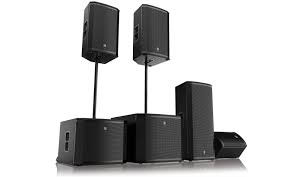 Electro-Voice (commonly referred to as EV) is a manufacturer of audio equipment, including microphones, amplifiers, and loudspeakers. A subdivision of Telex Communications Inc., Electro-Voice markets its products for use in small or large concert venues, broadcasting, houses of worship, and in retail situations.
Az ElectroVoice history

On September 1, 1927, Lou Burroughs and Al Kahn began a small business servicing radio receivers in South Bend, Indiana. As a result of the Great Depression, the two found themselves insolvent to the extent of $5,000. They decided to move their business to audio products, and on June 1, 1930, they incorporated under the name "Electro-Voice."

Burroughs and Kahn perceived an opportunity to capitalize on what they perceived as the generally poor quality and high prices of existing microphones. They purchased a lathe and a drill and started producing about one microphone a week. Soon after, Burroughs withdrew from the business, leaving complete ownership to Kahn. By 1933, the previous business debts were completely paid off, and Electro-Voice began hiring employees to help in the production of the products. In 1936, twenty people were hired, and Lou Burroughs returned as chief engineer.

In 1946, the business moved to a bigger facility and expanded its engineering efforts. In 1948, they began successfully producing phonograph pickup cartridges. In 1950, they started production of the first automatic TV booster, which sold in great quantities. They also started to design and produce a loudspeaker line. In 1963, EV received an Academy Award for their 642 Cardiline shotgun microphone, the first ever given for an audio product. Prior to the February 1998 merger with Telex Communications, the company was owned by Mark IV Industries, Inc. through its subsidiary, Gulton Industries, Inc., and had manufacturing plants in Buchanan, Michigan; Newport, Tennessee; Sevierville, Tennessee; and Gananoque, Ontario. Electro-Voice's headquarters were in Buchanan, Michigan until the merger with Telex Communications.

In June 2006, EV, along with all of Telex Communications, became part of Bosch Security Systems division. Today EV manufactures widely used broadcast microphones as well as loudspeakers and various other professional audio equipment.

Electrovoice RE16 - RE50 Broadcast

This email address is being protected from spambots. You need JavaScript enabled to view it.